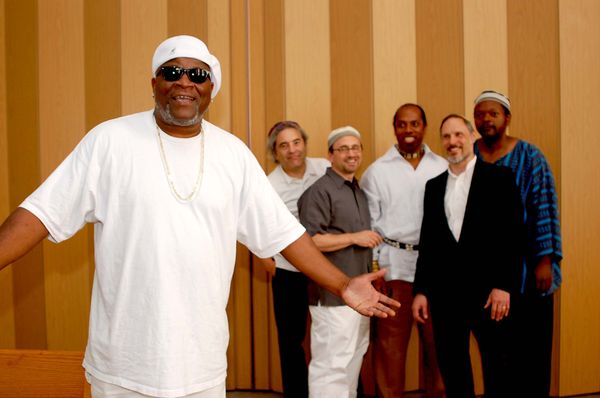 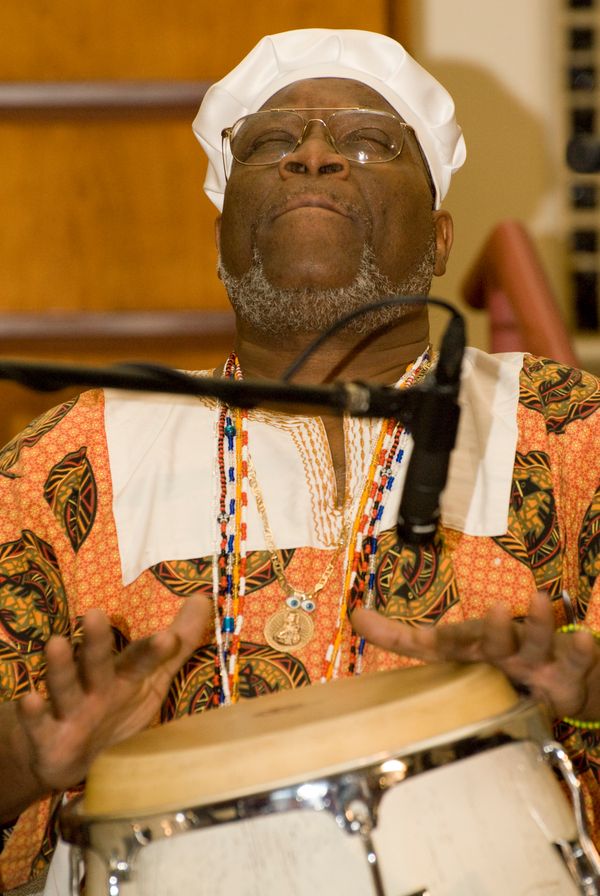 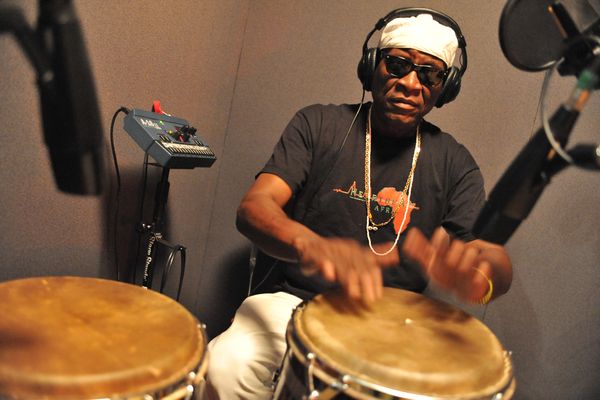 They say all good things come to an end. Well, I wish it wasn't him...

Baba David Coleman passed away last night. I'd like to think he did so to his big beat.

He had rambled and rollicked so on this earth, sometimes like crashing rocks, sometimes as refulgent pearls,

but always with Obatalá cushioning someplace in the cut.

Always kingly in his mien, his laughing, trickster heart would belie.

Even when he held court, with gleaming eye, someone taking him in with sense inside could swear a tear was there: it was one of joy and sorrow both.

Calloused hands coaxed tongues out of congas, stars out of chimes, giggles out of rattles, larks out of sherekes--those calloused hands told stories with us on our bandstands.

I should have called...but but but...need I say more? It's just like me to let a legacy of someone--someone like you--to haunt me silently and not share.

From where you are now, catch my silent mourning, and just know, you've always been in my heart.

You'll always be in the hearts of the Afro-Semitic Experience (that collective, you know, "group heart").

Baba David Coleman  was an incredible artist, very knowledgeable and mesmerizing in talking to you about his art and live stories! I had the honor of working with him multiple times through David Chevan and Warren Byrd's great co-led ensemble "The Afro-Semitic Experience". We will forever treasure the memories of him in our heart! 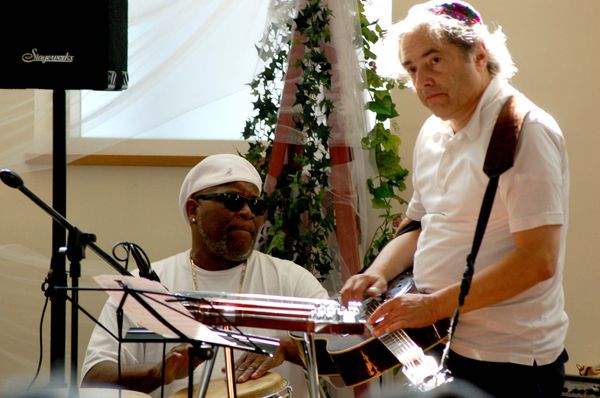 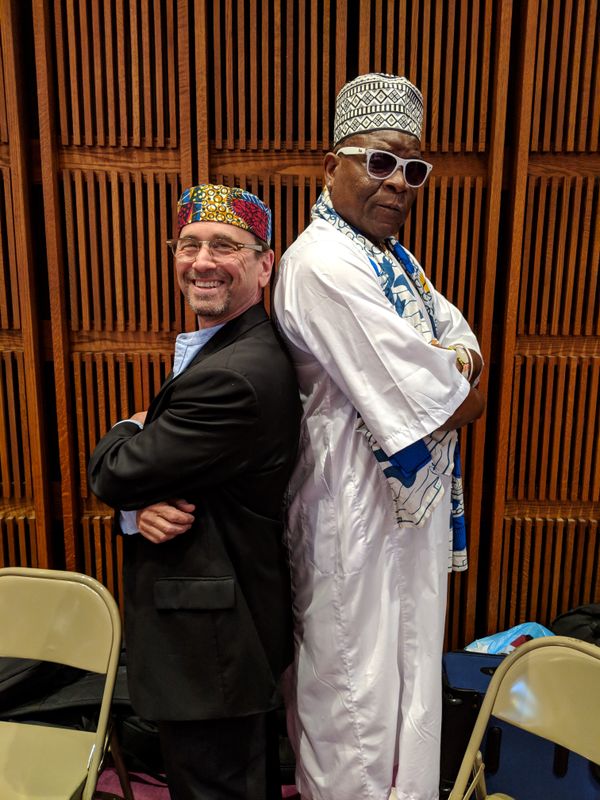 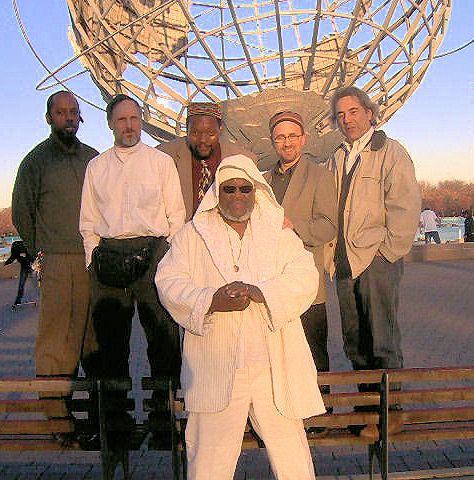 Baba David Coleman died peacefully on Saturday night, February 27, surrounded by his family.  He had recently been diagnosed with stage IV liver cancer that had entered his lungs.  There are plans for a memorial service and I will share them when the family notifies me.

For me, Baba was a friend and a band mate: he was a founding member of the Afro-Semitic Experience.  His reach went far beyond any one band and any one community. In the decade or so that he lived in the greater New Haven community he made a profound impact through his teaching at many neighborhood schools.  His contributions to the community were acknowledged in 2011 when he received C. Newton Schenck III Award for Lifetime Achievement in and Contribution to the Arts from the New Haven Arts Council.

From the stories he shared with me, I know he had an equally profound impact on the communities in Ohio where he lived both before and after he lived in New Haven. Over the past few hours, thanks to social media, I have read so many loving testimonies about Baba David Coleman.  For all that I knew of him from personal experience, I learned so much more.  Everyone has a story to tell and I was so touched to read them.

I first met Baba David Coleman at the Neighborhood Music School Jazz Camp on Audubon Street in New Haven in 1998.  In what was (and still remains to my knowledge) a unique experience for a jazz camp, Baba was teaching an African drumming class that was required for all of the students enrolled in the program.  That meant the rest of us on faculty had a free period.  Rather than taking a break, I decided to use that time to attend the drumming class.   It was a transformative experience.  There were close to 40 of us crammed in a small room, each of us with a drum or percussion instrument in front of us.  Baba was a gifted teacher. He found ways to give everyone an outlet on the drums and then, once we’d made some noise, he was able to get everyone quiet and focused. We learned how to properly play the drums and over the course of the week, we learned several drum calls.  By the end of the week when Baba asked for silence, there was complete silence, and when he asked us to play, because of how he’d taught us, we played with a sense of purpose and meaning!!! After class we would talk while I helped him put the drums away.  When Warren Byrd and I expanded our project from a duo to the Afro-Semitic Experience I asked Baba if he would play with us and he immediately agreed.  And so, for over a decade we would share bandstands together and teach each other music.

Baba’s time in the Afro-Semitic Experience was magical. He brought so much to our performances.  As good as he sounds on a recording, Baba’s love of life, of creating joy and of bringing people together through our music was always apparent when we were all playing music together. I hope some of that energy is captured in the many photos I’m sharing. There are a few clips online of him playing with us.  This video is from our performance at the Museum of Jewish Heritage in New York. It’s an arrangement of “Obatala”, a Yoruba prayer, that Baba would sing with us.

At a certain point Baba asked me if we could travel together to gigs.  That was the beginning of a whole new level of education for me.  My car became a classroom, and our trips were opportunities for Baba to play CDs for me, to teach, and for us both to share stories about Yoruba, African American African drumming, Cuban music, race relations, social justice, child rearing, and much more.  We spent hours together on the road and we swapped stories, shared meals, and educated one another.  Those are the memories that are so strongly within me at this moment.

Baba David Coleman gave so much to so many people. Wherever we went and whomever we met, he was received with love and respect.  I’ve rarely seen anyone with that deeply spiritual quality.

I am glad that I was one of those people and that we spent some of our life’s journey together.

May his memory always be a blessing