Just wanted to let you all know about a few performances coming up in September for the Afro-Semitic Experience.
New Haven concert to Premiere of Jazz Souls on Fire (and reprise music from Further Definitions) 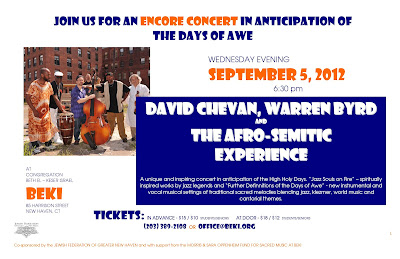 On Wednesday, September 5 the Afro-Semitic Experience will be giving their first concert in the New Haven area since 2010. We’re playing at Congregation Beth El Keser Israel (better known as BEKI) in the Westville neighborhood of New Haven. We’re playing two sets of music that night—for our first set (which begins at 6:30 pm) we are going to premiere music from our new project, “JaZZ SouLs oN FiRE”. And for our second set (around 7:30 pm or so) we are being joined by Cantor Erik Contzius to sing music from Further Definitions of the Days of Awe our ongoing spiritual musical exploration of music for the High Holy Days. Erik was with us when we performed (and recorded) the Further Definitions concerts in New York and Greenfield, but he wasn’t able to make the New Haven concert. But this won’t be Erik’s first concert in New Haven (that I know of) as he sang some of our music from our setting of “Yizkor” at an SCSU Holocaust event a few years ago.
BEKI ‘s address is 85 Harrison Street—it’s just off Whalley Avenue in New Haven. Here’s the important info: A light supper/dessert will be served. Tickets at the door are $18 for adults and $12 for seniors (65 and over) and students. For more information, please contact Darryl Kuperstock (kuperst@aol.com / 203-387-0304), Isaiah Cooper (icooper@cooperlaw.net / 203-233-4547), or the BEKI office (office@beki.org / 203-389-2108).
On Saturday, September 8, Will, Warren, and David are going to Temple Israel Center of White Plains to accompany Cantor Jack Mendelson and a choir made up of several members of the Western Wind for a Selichot service. If you’re in the Greater New York/Westchester area and you haven’t heard Cantor Mendelson daven, then you don’t know what it is like for you to be so taken into that hazzonos realm that it takes a good long while for you to realize that you’ve been standing so long your feet are starting to hurt. The service begins around 11 pm and goes till . . .? Temple Israel Center of White Plains is located at 280 Old Mamaroneck Road White Plains, New York.
The next day, on Sunday, September 9, the Afro-Semitic Experience is going to be performing at the Syracuse Jewish Festival, in Syracuse, New York. Actually we are not going to Syracuse, we are going to DeWitt, because that is where the JCC is located. We’re going to be the featured artists at the festival and in addition to our own music we’ll be also playing with the Syracuse Chapter of the Gospel Workshop of America. And, if that isn’t enough they want us to play some traditional Jewish Dance music so that they can compete to be in the Guinness Book of World Records for the worlds largest Hora!!! For more information about the Syracuse Jewish Festival please click here to visit their web site.